Photographs of fire stations and personnel of the Atlanta Fire Department as well as of notable fires in Atlanta during the 20th century. 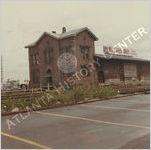