Black-and-white photographs of Allen, Inman, Richardson, and Grant families of Atlanta, Georgia from 1840 to 1990.

Description
The collection consists of images of family members and friends of the Allen, Inman, Richardson, and Grant families of Atlanta, Georgia. Most of the photographs of family members consist of images of Ivan Allen, Sr. and Ivan Allen, Jr. Included are photographs of Ivan Allen, Sr. at business meetings, civic and social events, and with friends and family. Photographs of Ivan Allen, Jr. include those from his childhood throughout his career as a businessman and mayor of Atlanta. Also included are photographs of employees and the buildings and grounds of the Ivan Allen Company and its predecessors, Fielder and Allen and Ivan Allen-Marshall Company. The collection also contains photographs of sites of importance to the Allen family in the state of Georgia, including the private residence of Ivan Allen, Sr., and that of Hugh Richardson, and the Little White House in Warm Springs, Georgia., The Georgia roots of the Allen family began shortly after the Civil War when Daniel "Earnest" Allen (1847-1879) of Greene County, Tennessee moved to Dalton, Georgia to work in a dry goods business. In 1870 he married Susie Harris (1859-1936) of Dalton and in 1876 they had a son, Isaac. After Earnest's death, Susie renamed their son Ivan Earnest Allen. Ivan Allen (1876-1968) was a businessman and civic booster who moved to Atlanta in 1895 and co-founded his office supply company with entrepreneur James Fielder in 1900. The company changed owners in 1919 and became the Ivan Allen-Marshall Company, and later the Ivan Allen Company. He and his wife Irene Beaumont (1890-1972) gave birth to a son, Ivan in 1911. Ivan Allen, Jr. (1911-2003) served as president of the Ivan Allen Company and also as mayor of Atlanta from 1962-1970. Allen is credited with leading Atlanta through an era of significant economic growth while maintaining relative calm during the civil rights movement. Allen married Louise Richardson (1917- ), the granddaughter of Atlanta businessman Hugh T. Inman (1846-1910) in 1936. Hugh T. Inman married Margaret Josephine Van Dyke (1849-1920) in 1871 and together they bore five children: Annie (1872-1955), Josephine (1875-1963), Hugh, Jr. (1879-1881), Edward (1881-1931), and Louise (1883-1888). Annie Inman married John William Grant (1867-1938) in 1893, and Josephine married Hugh Richardson (1874-1951) in 1898. For more complete genealogies on the Allen, Inman, Grant, and Richardson families, please refer to Pomerantz and Galloway. 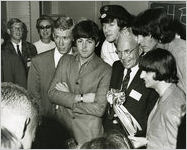 1. Ivan Allen with the Beatles 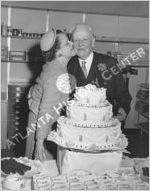 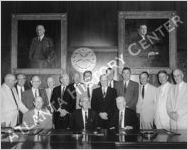 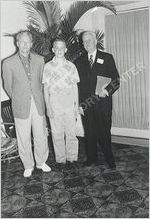 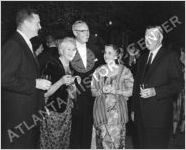 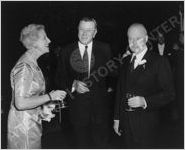