Description
George Alexander Sewell (1910-1983) was a professor, pastor, and author. While a student at Morris Brown College, he became the co-founder and first editor of the Wolverine Observer, the official student newspaper. After graduating from Morris Brown College, Sewell worked as a principal and teacher in the Jackson County Public schools in Jackson County. Outside of his work as an educator, Sewell was a minister of the Eighth Episcopal District and pastored several churches. He was a member of the General Conference from 1956-1980 and chaired the Revisions Committee 1976 quadrennium. Sewell was elected to the General Conference Commission and served as the Secretary on the General Board of Education for the AME Church. 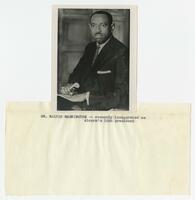